Can you please give me some feedback?

It was a feast of feedback last week: feedback sought, given, analysed, and absorbed – for the leaders whom I coach and for myself.  And it is the topic of this week, for the multicultural team building I am doing in Dubai and the team retreat in Siena.

In leadership, it is the one thing most sought after, the least given, the most feared, the most appreciated.


And perhaps it is the same in life.

Ken Blanchard said, “feedback is the food of champions”. We see how social media works on the principle that people like to receive feedback, particularly with the ‘like’ button.  The ‘tougher stuff’, for some termed 'honest criticism' on the other hand, as Franklin P. Jones said, “is hard to take, particularly from a relative, a friend, an acquaintance or a stranger”.

At one level, we are constantly receiving feedback from the universe; if we are to believe our lives are a direct reflection of our thoughts and actions.  Similarly,  others are also constantly feeding back to us about the impact we have on them.  It is just sometimes we miss the cues.

That is why, every now and again, and ideally more often – it is a good idea to explicitly seek feedback.  We may not be guaranteed that the other will give it, or that they will give it in a way that we would like to receive it, but if we suspend judgement as to whether it is good or bad, negative or positive, developmental or motivational – and just consider it information given with positive intent, it has the power to transform our lives.

And effectively repackaging feedback,  there is the idea of feedforward as suggested by Marshall Goldsmith. It is when we ourselves identify what we want to improve, and the other person simply gives suggestions as how we may go about that. They don’t refer to the past. We don’t comment or analyse. We listen and we give our thanks.

Looking forward to hearing your suggestions as to how I can improve the content of my blog. 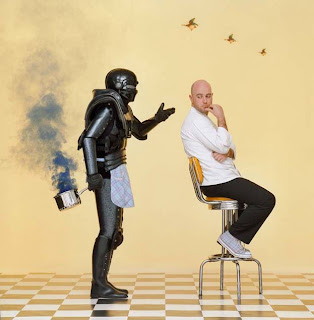 Image: Breakfast’s burnt Sir, One of British photographer John Reardon's super-surreal portraits of chefs for the Observer Food Month As posted by Vivid Greeting Cards on Facebook 28 June 2013.  Vivid Greeting Cards – luxury matte greeting cards.  Sign up to their Facebook Page to celebrate art, beauty and the many wonders of the world : https://www.facebook.com/pages/Vivid-Greeting-Cards/187838957957375

Penelope Mavor
Spain
I am the founder of Earth Converse, a leadership consultancy which exists to help sustainable leaders have the conversations they need to. As part of that, I offer some short snappy musings to stimulate inner and outer conversations. From March 2020, these will be located directly on the website www.earthconverse.com