“And you? when will you begin that long journey into yourself?”

Life is a journey is it not?.  Perhaps one big one..with lots of little journeys enroute.

On the journey between team building in Sharjah and team building in Tuscany last week, I read Wild.  A story about one woman’s trip along the Pacific Crest Trail, it triggered memories of one of my own solo journeys – biking around Italy at the end of my Masters in Business Administration (MBA) this time 8 years ago.   The trip was something I felt compelled to do; it wasn't logical  – to embark on such an adventure instead of undertaking an internship as part of the MBA.  However it turned out to be a more meaningful personal growth ‘project’ for me.

I called it my ‘other MBA’...my mini biking adventure, and here’s the poem I wrote to capture the sensations and experiences:

Through craggy cliffs, lido laden lungomares, marshy plains, industrialized islands, charming cities, and fire threatened forests,
From Trieste to Sicilia,  to Napoli and beyond,
I have...
Skimmed the rim of Italy, of cappuccinos and my right shoulder
Savored sights, smells, sounds and tastes from north to south
Passed through beautiful places and passed up even more
Shivered from the cold and sweated from the heat
Sensed wind in my hair, sun on my face and pain on my butt
Rushed downhill and from place to place
Lost my way and a few bits and pieces
Received whistles and toots, as a joke, a warning or encouragement
Sworn under my breath, lost my breath and held my breath
Called on lady luck and more often said fcuk
Broken equipment and communicated in broken Italian
Gone to sleep to the sound of waves, trains, discos and storms
Had flat tires, flat spirit, flat hair and been flattered
Been stared at, saluted at, smiled at and shouted out
Gullibly been taken for a ride and courageously ridden from dawn to dusk
Thought too much and thought nothing at all
Relished my solitude and been scared and saddened by it
Trusted my gut instinct, used my head and followed my heart
Decided on the toss of a coin and tossed the result
Feared from threats of hostility and been humbled by hospitality
Meet new people, experienced and learnt
Suffered from frustration, exhaustion and confusion
But been more exhilarated, delighted and amazed

All in all, a fantastic MBA
My mini biking adventure 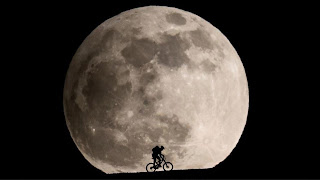 I can look back on that 7 week quest as one which tested my physical, psychological and emotional boundaries in an intense way.  In many respects it was a key turning point in my life, including how as a result, it catapulted my leadership consultancy career in a new direction and established my roots in Italy.

And to draw on another of Rumi’s provocations being, “and you? when will you begin that long journey into yourself?”, it reminded me that the most significant and longest journey we take, is that within ourselves.

Thanks to Andree for the book suggestion!
Image:  'E. T.' by Switzerland-based photographer Philipp Schmidli. As posted by Vivid Greeting Cards on Facebook 4 May 2013.   'Schmidli's long telephoto configuration allowed him to exploit an effect known as 'perspective distortion', wherein distant objects look significant larger relative to their foreground counterparts.  When it comes to photographing the Moon, most photographers will recommend using a 200mm+ telephoto lens for precisely this reason.  To achieve this effect, Schmidli had to station himself more than 1000 meters away from his friend on the bike, and employ a staggering 1200 mm focal length. Schmidli writes on his blog that he spent months scouting out the perfect vantage point for this shot, conducting much of his reconnaissance with Google Earth and a handheld GPS.'   Vivid Greeting Cards – luxury matte greeting cards.  Sign up to their Facebook Page to celebrate art, beauty and the many wonders of the world : https://www.facebook.com/pages/Vivid-Greeting-Cards/187838957957375
Thanks to all the special people who helped me on this particular journey, especially Giuseppe N., and to the MIB School of Management for the MBA experience;  Lane4 for recognising my potential and employing me after my MBA; and Impact International whose ‘life is a journey’ slogan continues to inspire me.

Posted by Penelope Mavor at 8:33 AM

Penelope Mavor
Spain
I am the founder of Earth Converse, a leadership consultancy which exists to help sustainable leaders have the conversations they need to. As part of that, I offer some short snappy musings to stimulate inner and outer conversations. From March 2020, these will be located directly on the website www.earthconverse.com